Both these saws come with a rotating circular blade that is hooked up to a pivoting arm. Also, both of them are the tabletop version. 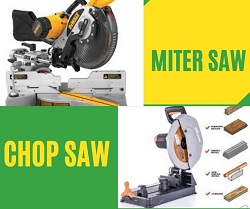 This is a metal cutting chop saw that features an abrasive spinning blade that is mounted on a pivoting arm. Instead of having teeth, the blade/disc comes with a diamond coating that is used for abrasion.

Uses of a Chop Saw

Mostly, chop saws will be used in masonry, metal, composite, and wood applications. You can use a chop saw to slice through lumber with embedded nails. That is why it is commonly found on construction sites.

It possesses excellent power and can deliver precise cuts with a toothless cutting disc. For It's extraordinary metal cutting ability people call it Metal cutting saw. 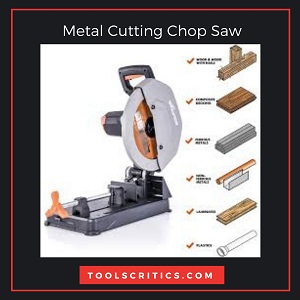 This is a saw that comes with a vertical circular blade that is also mounted on a pivot arm, just like a chop saw. It swivels to cut angles and the blade can swing to the right or left to make bevel, compound, and miter cuts with ease. The blade on a miter saw will be between 8 inches and 12 inches in size.

With corded or cordless miter saws, they tend to come with a smaller size compared to chop saws. Keep in mind that some miter saws can swing either to the left or right to minimize the need for flipping the material that you are working on. In other words, some models come with a dual bevel.

Uses of a Miter Saw

Normally, miter saws will be used for complex cut projects. For that, they will mostly be used for detail work in the crown and base moldings. But they can also be used in making door and window frames since they make very precise cuts. It would be better if you learn first how to use a miter saw.

If you are not using the saw for steel, you can select it with peace of mind. 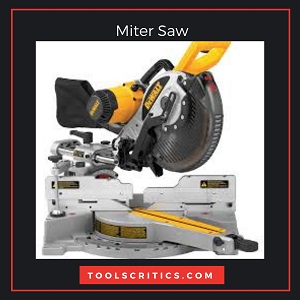 How Do They Differ?

The major difference between these saws is that a miter saw can spin and deliver angle cuts as well. On the other hand, a chop saw only delivers straight, 90-degree cuts. Another difference is that a chop saw is larger and more powerful than a miter saw.

Conclusion: Which one should you choose?

Within Chop Saw VS Miter Saw, you should pick the saw that specifically meets your project needs. If you are a DIYer and you need a tool to handle projects around the house, you should go with a miter saw. But for the professionals that have heady-duty projects, a chop saw should be the ideal tool. It is recommended to use good quality miter saw stand while using both these saw.

Tools Critics aims to provide you with a range of unbiased options when it comes to choosing a tool. Our team hand picks each product based on price, popularity and past reviews to give you peace of mind.

ToolsCritics.com is a participant in the Amazon Services LLC Associates Program, an affiliate advertising program designed to provide a means for sites to earn advertising fees by advertising and linking to amazon.com.